Since the Audi A3 was first released in 1996, it has developed a fourth-generation model. Both Volkswagen Golf and Audi A3 are developed based on the MQB platform, the modular platform of Volkswagen Group.

A little bit different from Volkswagen Golf is that Audi A3 is built on the improved MQB platform. The problem is that Would this cluster on a 2017 Audi A3 Sedan be still MQB platform? Because last week I received a client’s commission, and his car is 2017 Audi A3. I’m not sure Would my OBDSTAR X300M be able to work on these clusters NEC35XX.

The first question: Although the 2020 Geneva Motor Show was forced to be cancelled, the Audi A3 had to be released online, but it can be seen that even the fourth-generation Audi A3 is still based on the MQB platform.

The second question: I directly used OBDSTAR X300M to experiment. The result is confirmed: Sure, OBDSTAR X300M works well with this MQB cluster no hassles also does a backup before final writing new mileage. 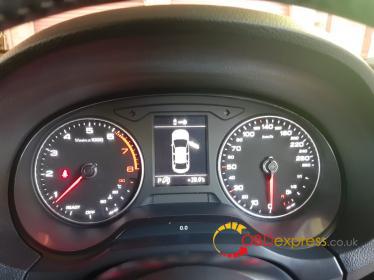 Regarding the previous Audi A3 models, you can Read related article: 2014 Audi A3 MQB odometer correction with obdstar dp plus